ICCUB news: "Dones i física", the new travelling exhibition elaborated with the collaboration of the Institute of Cosmos Sciences of the University of Barcelona 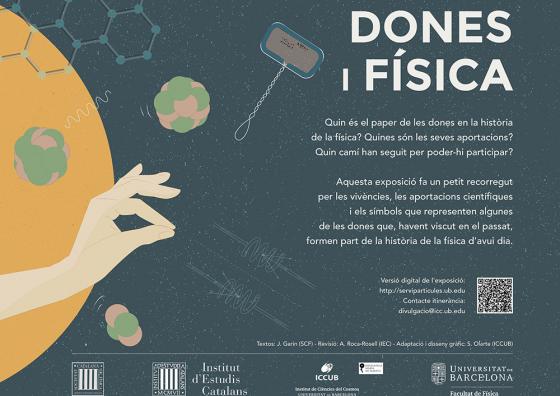 On Wednesday, September 18th at 18:30 at the Institute for Catalan Studies, IEC, will be presented the exhibition "Dones i física", prepared by the Catalan Physics Society, SCF, a subsidiary of the Institute for Catalan Studies in collaboration with the Institute of Cosmos Sciences, ICCUB, and the Faculty of Physics. The event will precede the presentation conference of the 2019-2020 course of the Catalan Physics Society «La física dona. La dona física» given by Àngels Ramos, researcher at the ICCUB and Professor of Atomic and Nuclear Physics at the University of Barcelona.

The display at the Institute for Catalan Studies will be open from 9:00 to 20:00, from Wednesday 18th September to Saturday 21th September with free admission.

Next Tuesday, February 11, International Day of Women and Girls in Science is celebrated.

Why Physics? 291 Woman explain it

This video is a compilation of all the participations on the Instituto de Física Teórica IFT's initiative #YoFisica, in the frame of the International Day of Woman and Girls in Science.

Interview with Licia Verde, ICREA research professor at the Institute of Cosmos Sciences of the University of Barcelona (ICCUB). Premi Nacional de Recerca 2018.