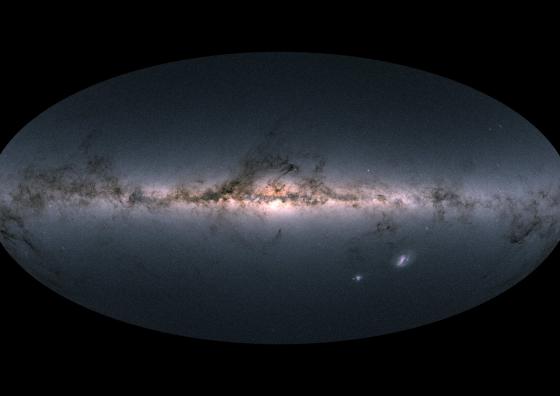 The Institute of Cosmos Sciences of the University of Barcelona will participate once again in the Relativity Days organized by the Terrassa Astronomical Society.

The Terrassa Relativity Days have been organized annually since 2008 to bring scientific dissemination to the city of Terrassa on topics related to the Theory of Relativity, inviting scientists active in current research to spread the most exciting findings in astrophysics, cosmology, quantum physics and other fields of science in which applications of the Theory of relativity and gravitation are emerging.

Where? Science and Technology Museum of Terrassa.

Registrations: on the following link.

9:30 presentation by the president of the AAT and representative of the Terrassa town hall.

9:45 presentation Conferences and poster talk on the black hole in the centre of the Milky Way by Dr. Jordi Miralda

10:00 talk by Carme Jordi. Title: from The Gaia mission never ceases to amaze us: new discoveries of the Milky Way

12:45 Talk by Guillem Anglada. Title: Life beyond Earth and exoplanets.

17:30 Visit to the observatory of the Astronomical Group of Terrassa.

20:00 Appetisers courtesy of the AAT.

21:00 Astronomical observation at our observatory.

Summary of the Talks

The Gaia mission never ceases to amaze us: new discoveries of the Milky Way.

The Gaia mission of the European Space Agency, which has recently published the third archive of data on the positions and motion of stars, is revolutionizing the knowledge of our Galaxy, the Solar System and also external galaxies and quasars. We will present the most spectacular discoveries about our galaxy, the Milky Way, from new Gaia measurements, especially the three-dimensional velocities of 33 million stars and the chemical element abundances of 2.5 million stars.

Einstein's Relativity, the foundation of Cosmology.

Einstein's theory of gravity is not only the fundamental tool to explain gravitation and black holes, but the basis for understanding the evolution of the Cosmos. In this talk we will take a journey from the beginning of our Universe to today, accompanied by the Theory of General Relativity.

Life beyond Earth and exoplanets

What is the origin of life? Are we alone in the Universe? These are two very fundamental qüestions that are linked to each other. For a couple of decades now, we have had the ability to detect planets with similar characteristics to our own around other stars, but we still have no evidence of life beyond our planet. We'll review where we are in this search, what our capabilities will be to find life in the near future, and what finding life outside our planet would entail.

From Black Holes to the Theory of Everything: Following the steps of Einstein and Hawking

“Astronomy: the ultimate frontiers” at the Gaudir UB courses

On the occasion of the anniversary of the publication of the Einstein's article about the General Theory of Relativity on December 2, 2015.

3rd time of the program, minute 3