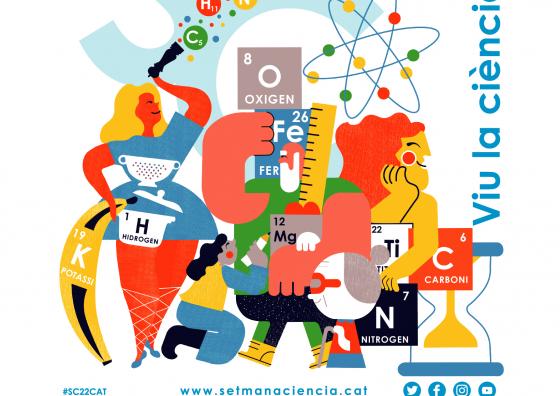 The Institute of Cosmos Sciences of the UB will participate in the 27th Science Week from November 11th to 20th with various activities and talks. Below you will find our program with all the proposals:

WORKSHOP: "THE FORCE THAT UNITES US"

2nd session: Wednesday, November 23 from 5:30 pm to 7:30 pm in the Valls Areny Room of the Mirador Building, Castellar del Vallès

Recommended age: from 10 years on

The darkness that can be seen on a moonless night reminds us of the distance to the other stars and objects in the Universe. Darkness is not only limited to the absence of light, it can also refer to the inability of the human mind to provide answers to the big questions. In this talk we will take a look at the history of cosmology. We will begin with the first ideas to explain the night sky in the past and end in the present day, where the dynamics of the Universe and its final destiny seem to be dominated by a mysterious entity, Dark Energy.

The workshop consists of a set of computer simulations of various experiments in which the quantum properties of matter are revealed. Discover the most surprising phenomena of quantum mechanics, such as the tunnel effect, Heisenberg's uncertainty principle or the double slit experiment, by playing with our simulations of quantum systems.

By Bruno Juliá and Francesc Sabater

Recommended age: from 16 years on

TALK: "THE SCIENTIFIC METHOD IN DAILY LIFE"
In this talk we will review the scientific method and its application to everyday life, with the aim of discarding myths and pseudosciences.
By Xavi Luri (ICCUB-IEEC)
When? Wednesday November 16 at 8:15am
Where? Menéndez and Pelayo Institute (Barcelona)

TALK: "WHY IS THE SKY BLUE"
The brightness of the sky comes from the light of the Sun, and although the Sun is rather yellowish in color, the sky is blue. Why? What makes the sky look a little more reddish at dusk or dawn? How would the colour of the sky change if our atmosphere had a different composition? What would we see if we lived on Venus or Mars? These are the questions we will answer in this talk.
By Carme Jordi (ICCUB-IEEC)
When? Wednesday 16 November at 1pm
Where? Menéndez y Pelayo Institute (Barcelona)

TALK: "DARK ENERGY"
Everything that we see or touch does not represent more than 4% of the energy and matter contained in the universe. The rest is the "dark" content: dark matter and dark energy. The session will focus on dark energy and we will seek the answer to several questions. What is cosmology? What evidence or measures do we have of its existence? What does a theoretical physicist do? What is dark energy and what is its relationship to the fate and history of the universe? What theoretical tools do we use to study it?
By Cristian Moreno (ICCUB)
When? Friday, November 18 at 9am
Where? INS Miquel Tarradell (Barcelona)

EXHIBITION: "JOURNEY TO THE DARK UNIVERSE"
The night sky is full of spectacular images that catch our eye and make our imagination run wild. However, there is much more out there than meets the eye, much more to discover. The traveling exhibition "Journey to the Dark Universe" invites us to a journey through the fascinating frontiers of cosmology and gravity, ranging from dark matter and dark energy, to black holes and gravitational waves.
When? From Monday 21 to Friday 25 November, from 9am to 8pm
Where? Espai Sales of the Mirador Building, Castellar del Vallès

TALK: "LIFE IN THE COSMIC OCEAN"
It is highly unlikely that life exists only on our planet, whether in the form of simple single-celled microorganisms or highly complex and intelligent beings. This argument emanates from the Copernican Principle or principle of mediocrity.
In this talk we will review the main ideas about the existence of extraterrestrial life from various scientific fields, presenting arguments based on knowledge and reason, however limited they may be, and avoiding speculation.
By Josep Maria Solanes (ICCUB)
When? Wednesday 23 November at 8pm
Where? Assembly Hall, Mirador Building, Castellar del Vallès
General public

Zombie and Degenerate Stars: A Walk Through the Star Graveyard

Dark Energy and the Expanding Universe

ICCUB pre-doctoral researcher Cristian Moreno was at the Castelldefels Digital studios talking about dark energy and the accelerated expansion of the Universe last November 17.

Opening of the Exhibit "Isotopes and mass spectrometry: 100 years, from Nobel to Francis W. Aston"

The opening of the Historical Background Exhibition "Isotopes and mass spectrometry: 100 years, from Nobel to F

Aboard Beagle T2. Are the expectations created with nuclear fusion energy realistic?

Arnau Ríos, Ramón y Cajal researcher at the Institute of Cosmos Sciences of the UB, is cautious about the latest experiment carried out with nuclear fusion energy at the Lawrence Livermore National

In this game, the user controls a door that separates two chambers with a gas.