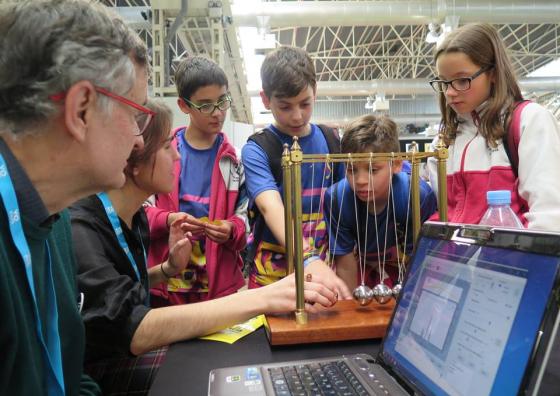 The "Simulations of Quantum Mechanics" workshop will participate in YOMO 2019 from 25th to 29th of February 2020. It will be located at the stand of  "Tecnologies Quàntiques amb Àtoms Ultrafreds" (ATOMQT) from 9:30 to 16:00 on Tuesday, Thursday, Friday and Saturday, and at  the stand of "La UB divulga" for the Wednesday whole edition.

All the material of this workshop has been made in open code by university course students of the Faculty of Physics of the University of Barcelona.

In this stand participants will explore one of the most fascinating theories developed by humans: the quantum mechanics. Students will discover some of the most interesting phenomena that emerge from this theory that make possible to possible build quantum technologies. This kind of technologies will have a great impact in the field of computing, information management and cryptography in the near future.

The stand has two sections: simulation and experimentation. In the first one we will play with quantum phenomena simulations and we will compare them with our day to day experiences. In the second one, we will experiment with the classical interference phenomena, we will observe the wave behavior and discuss the differences between waves and particles, one of the classic debates of quantum physics.

At the end of the workshop, we will provide all the information needed to replicate some of the experiments carried out during the activity at home or at class.

This is the third time that theUniversity of Barcelona participes in this festival with a stand organised by Unitat de Cultura Científica i Innovació (UCC+i).

Over five days, YoMo Barcelona will welcome 22,000 school children from across Catalonia and Spain to one huge showcase of science and technology.

With live theatre shows, interactive workshops, and dozens of hands-on activities, there will be something to engage every young person. YoMo is designed to bring classroom learning to life – by showing the exciting and rewarding career opportunities that are available in the mobile and STEAM ecosystem.

YoMo Barcelona is free to attend for registered school groups.

YoMo provides a unique opportunity for organisations within the STEAM community, academia, professional organisations and businesses engaged in the youth market to all come together and showcase their technology, brands, skills and ideas.

YoMo collaborates with Mobile World Capital Barcelona through mSchools, a programme in partnership with Generalitat de Catalunya, Barcelona City Hall and the GSMA. YoMo is an event of Mobile World Congress – the mobile industry’s premier event – and the GSMA, which represents the interests of 800 mobile network operators worldwide.

VI Science Fest of the UB

This year, the UB Divulga has decided to hold the VI Science Festival virtually.

Language
CA
This year's edition of the Science Festival of the University of Barcelona, organized by the Scientific Culture and Innovation Unit "La UB Divulga", is held virtually.
ICCUB news

Quantum technologies will be of great importance in the near future incomputing and cryptography techniques and information handling.

Simulations on Quantum Mechanics at the Saló de l'Ensenyament 2020

DUE TO THE CURRENT SITUATION REGARDING THE COVID-19, FIRA DE BARCELONA HAS DECIDED TO CANCEL THE 2020 EDITION.

Video of the clavsqua.py module which solves the evolution of a gaussian wave packet on a configurable external trap in one dimension.