ICCUB news: New research points toward the existence of “naked” singularities that encourage us to rethink the validity of General Relativity 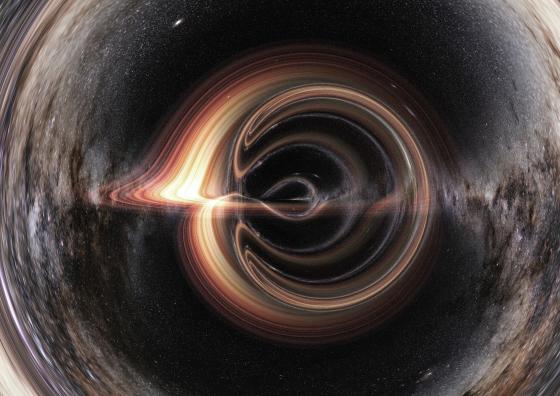 In an article published in BBC’s journal Sky at Night researchers, among which we find  ICCUB’s Postdoc researcher Tomás Andrade, study the possible existence of “naked singularities” that would put into question the prediction power of General Relativity.

Black holes are one of the most mysterious phenomena in the Universe. In a nutshell, they are regions of space-time that present two characteristic features: a point in space-time with infinite density and curvature called the singularity (which has infinite gravitational pull) and a boundary that, once you cross it, you can never go back to the outside world, called the event horizon.

In the singularity instant, the fabric of space-time rips apart and the laws of General Relativity go down the drain as does our prediction power, thus limiting the validity of the theory, since it would only work in certain regions of the universe. To fix this, Roger Penrose suggested in the 1960s that singularities must always appear covered by an event horizon. This proposal was known as Weak Cosmic Censorship Conjecture (WCCC). This way, the integrity of General Relativity was protected, since we would never be able to observe a breaking of the laws of physics from the outside.

Recent research, though, seems to suggest that naked singularities can indeed exist, thus putting General Relativity through a new test and hinting at a new, more comprehensive theory of gravity.

These studies state that naked singularities can appear in our universe using different mechanisms. For instance, the Hawking evaporation process may turn an electrically charged black hole into a horizonless naked singularity, or, a collapse of dust clouds in a theoretical 5-dimensional universe with a certain mass could also shrink to form a “sudden singularity”.

A third mechanism was analyzed by Tomas Andrade, of the ICCUB, who has recently discovered that it’s possible to rip the Event Horizon of a black hole during a collision of two black holes in a 6-dimensional universe. Apparently, the force of the impact elongates their event horizons, thinning them out and making them unstable. The merged event horizon then fragments in a similar way to water separating into droplets once the superficial tension breaks down. The research that led to these results is based on this paper where the mechanism was analyzed-- in collaboration with Roberto Emparan, David Licht and Raimon Luna at the ICCUB. The detailed simulation was performed in this article — in collaboration with Pau Figueras at Queen Mary University of London, and Ulrich Sperhake at Cambridge University. To run it, they used the supercomputer Marenostrum in Barcelona, which is the most powerful in Spain.

The main goal of this line of research is to fully understand the Cosmic Censorship Conjecture. So far, it seems that, even though the Conjecture can be violated, it only is mildly so, which is good news since General Relativity seems to come out of this new test relatively unscathed.

All of these lines of research point towards the possible existence of naked singularities, but then, one needs to figure out how to determine their existence observationally. One of the experts on the article discovered that stars orbiting a horizonless black holes would have a different precession motion. So, if we detect these precession variations, we would obtain direct evidence of the presence of stable naked singularities. This observation would give us a lot of information about the specifics of the new beyond-General Relativity theory and thus pave the way for the next theory of gravity.

Roberto Emparan at the Ateneu de Maó with the talk "From Black Holes to the Theory of Everything. Following the steps of Einstein and Hawking"

The Institute of Cosmos Scieneces reseracher and ICREA reseracher, Roberto Emparan, is giving the talk "From Black Holes to the Theory of Everything.

Roberto Emparan, researcher of the ICCUB, has participated in the new documentary series Territorio Gravedad about the physical phenomenon of gravity

On the occasion of the anniversary of the publication of the Einstein's article about the General Theory of Relativity on December 2, 2015.

3rd time of the program, minute 3

Interview with the physicist Roberto Emparan talking about black holes characteristicsand how science tries to define their nature.