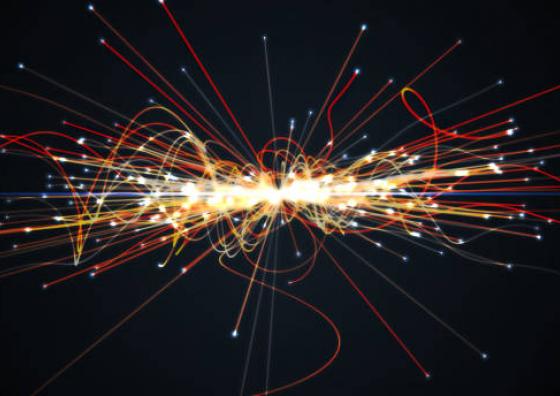 The LHCb Collaboration has recently presented new results that could bring us a step closer to understanding the different nature of matter and antimatter at a fundamental level and solve one of the longest-standing cosmological questions: Why is the Universe mainly made of matter?

These new measures, that were reported last Friday, March 17, at the Recontres de Moriond EW, show the largest CP violation ever observed.

But what exactly is CP violation?

For those who are not expert particle physicists, we simplify the concept for you. The C stands for Charge Conjugation Transformation of a particle, meaning that we exchange a particle for its antiparticle (for example, an electron for a positron). On the other hand, the P refers to a Parity Transformation, which takes the mirror image of the particle, as we can see in the image below. 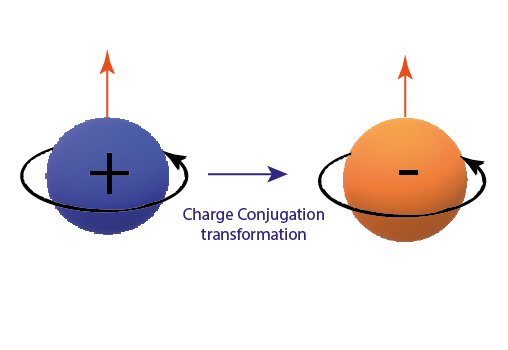 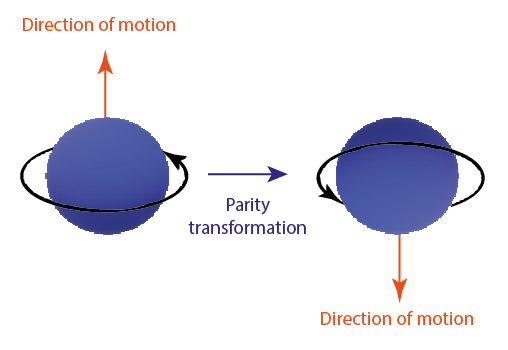 Scientists used to believe that all the fundamental forces in our Universe (electromagnetic, strong and weak) respected the CP symmetry, meaning that a particle moving to the right and spinning clockwise should behave exactly like its antiparticle moving to the left and spinning anticlockwise. This means that any experiment with a particle should yield exactly the same results as the same experiment with its antiparticle mirror-imaged. However, since the early 2000’s some experiments involving mesons (which are combinations of a quark and an antiquark) have emerged where the particle and the antiparticle, matter and antimatter, behave differently.

The new results show measurements of the largest CP asymmetry in charged B meson decays ever seen. The CP asymmetries are observed in the decays shown in figure 2, while the CP asymmetry shown in figure 1 is still compatible with zero. We can see this by comparing the heights of the right and left images which correspond to a particle and its antiparticle. A nonzero CP asymmetry is a demonstration that matter and antimatter decay in different ways.

The decays in study can happen via different intermediate processes, and each process results in specific momentum conditions for the product particles, which defines different kinematical regions. In one particular region, the CP asymmetry is as high as 75%, see figure 3. This is the largest CP violation ever observed. The image below shows us this specific kinematical region at which we observe a huge difference between the number of decays for the B+ meson and its antiparticle, B-, around the Xc meson – another unexpected and very interesting feature.

When the Universe began 14 billion years ago with the Big Bang, it is a fair assumption to say that there was an equal amount of matter and antimatter. Now our Universe is mostly made of matter, so one may wonder, how did it happen? Neither the standard model of particle physics, nor the theory of general relativity provides a known explanation for why this should be so. In 1967, the Soviet physicist Andrei Sakharov came up with three conditions that, if held true, could explain the dominance of matter over antimatter. Among these conditions was the need for the violation of the CP symmetry. These results, therefore, support the idea that some physical laws act differently on matter and on antimatter.

Ricardo Vázquez, researcher at the Institute of Cosmos Sciences of the University of Barcelona (ICCUB) and member of the LHCb Collaboration, says that "It is remarkable that the level of precision in some of these measurements is below 1%. The forthcoming run of the LHC will increase the amount of data that will enable to perform more sophisticated analyses to shed light on one of the most intriguing problems of modern particle physics."

So far, the  measured CP violations were too small to account for this imbalance between matter and antimatter, so “the fact that these new measurements are the largest CP violations ever observed could give us some insights into the causes of this violation and help us understand why matter and antimatter behave differently at a fundamental level” says Carla Marín, member of the LHCb collaboration from the ICCUB. “The next step is for our theoretical colleagues to interpret these results and come up with a mechanism that explains this big asymmetry. The fact that we observe it to be largest in a specific region around the  particle gives us a crucial clue as to know where to begin searching”.

With these results, the LHCb Collaboration has brought us a step closer to understanding why the Universe and ourselves are made of matter instead of antimatter and shed light into another chapter of the beginning of our Cosmos.

Read more about this article at the LHCb collaboration outreach website.

The teacher’s Training Day of the ADMIRA (in Catalan, Activitats

By
Several
Place
Faculty of Physics of the University of Barcelona
Time
16:00
20:00
Courses
Particle Physics

The new set of conferences "Admira Talks" will be held from May 28, 2021 to June 14, 2021 and it will consist on a series of 4 lectures given by international experts surrouding th

Activities with Medipix detectors to investigate Radiation in the classroom. (ADMIRA project)

This course belongs to the ADMIRA project<

Video of the complete edition of March 22, 2019 of the Workshop  on Particle Physics