Opening of the Exhibit "Isotopes and mass spectrometry: 100 years, from Nobel to Francis W. Aston" 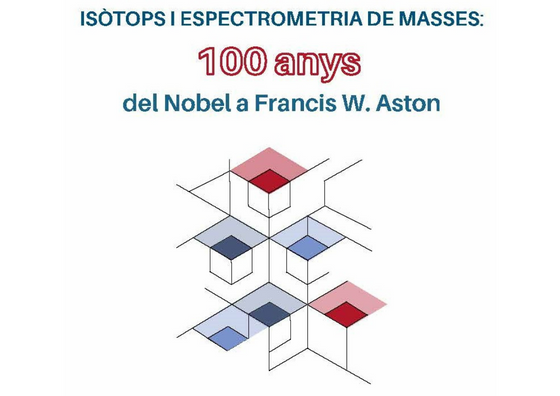 The opening of the Historical Background Exhibition "Isotopes and mass spectrometry: 100 years, from Nobel to Francis W. Aston" will take place next Wednesday, November 23 at 12:00, at the Physics and Chemistry Library of the University of Barcelona.

This exhibition consists of a collection of historical objects, infographics and other materials around the figure of Francis W. Aston and his study of isotopes and mass spectrometry.

The researcher of the Hadronic, Nuclear and Atomic physics group of the Institute of Cosmos Sciences of the UB, Arnau Ríos, has been one of the main curators of the exhibition, together with Professor Encarnación Moyano, from the Department of Chemical Engineering and Analytical Chemistry of the Faculty of Chemistry of the UB.

On the day of the inauguration you will have the opportunity to enjoy a conference by Dr. José Benlliure Anaya, professor of the Dept. of Particle Physics from the University of Santiago de Compostela on the isotopes present in matter. After the talk, we will enjoy a small refreshment.

We encourage you to attend this inaugural event and discover the mysteries that matter hides.

Francis William Aston (Birmingham, 1877 - Cambridge, 1945), a British chemist and physicist, was awarded the Nobel Prize in Chemistry in 1922 for the discovery of a large number of non-radioactive isotopes by means of a mass spectrograph and for discovering the whole number rule.

Aston studied chemistry and physics at Mason College (now the University of Birmingham). In 1919, at the Cavendish Laboratory in Cambridge, he designed and built the mass spectrograph, a device that allowed him to separate and measure the masses of different neon isotopes. Aston discovered up to 205 natural isotopes with improved versions of the apparatus and found that the mass of any isotope, measured in atomic units, is approximately a whole number. This discovery was a fundamental precursor of today's nuclear physics.

Aston's legacy is also very important in the field of mass spectrometry. Today, mass spectrometers are fundamental tools in most analytical laboratories and are used to detect and identify atoms and molecules, as well as macromolecules, polymers and proteins. These instruments have enabled significant advances not only in chemistry, but also in other branches of science, such as biology, geology and astrophysics.